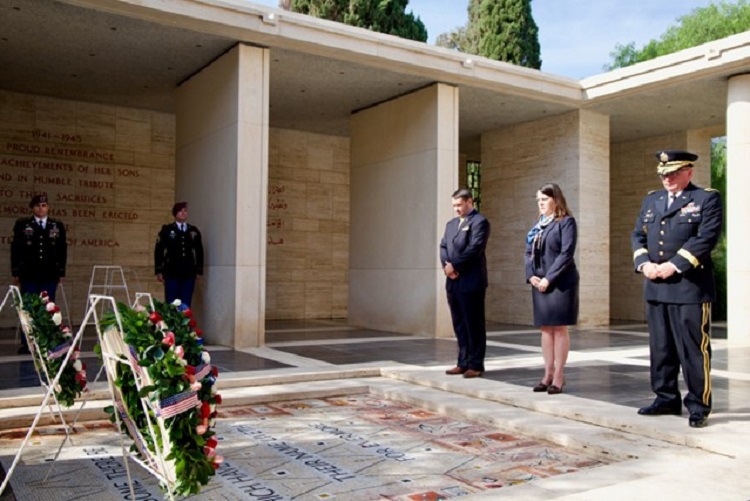 Brigadier General Solem, Vice Admiral Atallah, Director Bardaoui (MFA), Senior Captain Nasri (or senior MOD rep), Mayor Bayoudh, fellow Ambassadors, members of the Diplomatic and Military Attaché Corps, other honored guests…welcome to today’s ceremony.  And to all the men and women who currently wear or have worn the uniforms of the Armed Forces of the United States of America, Happy Veterans Day!

In 1919, Americans began observing what was then recognized in the United States as Armistice Day to commemorate the end of the “Great War” and to remember the war dead from that conflict.  Later, in 1954, President Dwight D. Eisenhower issued the first “Veterans Day Proclamation” which expanded the scope of this commemorative day to honor all American veterans – past or present – but especially our living veterans who have served their country honorably, regardless of their period of service.  You can find the text of this presidential proclamation printed in your programs.

So, today is a day when we pause to honor all those who have answered our nation’s call to protect our liberty and freedom while wearing the uniform of the United States Armed Forces. For our veterans present today, we salute you and thank you for your service.

As we stand here on these hallowed grounds, it is also very appropriate that we acknowledge our “past” veterans of which over 2,800 from the Second World War rest eternally in the burial plots, and over 3,700 of their comrades who were never recovered have their names carved into the Wall of the Missing.  I would like to specifically thank our Tunisian partners for their recent assistance in honoring our dead here in the North Africa American Cemetery.  For those who are not aware, Foreign Minister Jerandi and I signed an Memorandum of Understanding last May which paved the way for the American Battle Monuments Commission (ABMC) and the Defense POW/MIA Accounting Agency (DPAA) to disinter five of our unknown soldiers for DNA testing.  If all goes well, we hope to be able to provide some closure to five American families who have gone nearly 80 years not knowing the fate of their loved one, so again we thank you for your support.

In fact…eighty years ago today, American and British troops were still fighting to secure amphibious landing force objectives on the Atlantic coast of Morocco and the Mediterranean coast of Algeria.  Many of the Americans commemorated here in the North Africa American Cemetery lost their lives during this fighting as part of Operation TORCH.  Their efforts and sacrifices helped the Allied Forces in gaining a foothold in North Africa, which enabled the subsequent Tunisian Campaign, and eventually led to the ejection of Axis forces from this region.

Commemorative sites like the North Africa American Cemetery are tangible reminders that help us realize the cost of freedom, while also providing perspective and context to help us comprehend the burden that so many of our living veterans bear in their hearts and souls.  Our nation owes a debt to them…one we can never fully repay, but we can acknowledge this and thank them for their service.

Again, I would like to address each veteran gathered here, American and Allied. We recognize and are grateful for your service to your respective nations.  Today, there is another war being waged on the European continent, the outcome of which will have profound implications for global peace and stability. I want to also take a moment to recognize the brave Ukrainian soldiers who are fighting to defend their homeland and honor those who have made the ultimate sacrifice in the service of their country.

It is now my pleasure to introduce our Guest of Honor:  Brigadier General Jon E. Solem, the Deputy Director for Plans and Strategic Integration at United States Africa Command.

Welcome and thank you all for being here to celebrate Veterans Day – a time where we honor and recognize American service members past and present.

I would like to thank all those who made this event possible – in particular the incredible team here at the North Africa American Cemetery and Memorial, who do an amazing job maintaining these hallowed grounds. You honor the memories of those who are buried and remembered here.

The history of Veterans Day originates back to the signing of an armistice on Monday, November 11, 1918, at 11:00 a.m., when all fighting ceased between the Allied nations and Germany, effectively ending World War I.

The original concept for the celebration was a day observed with parades, public meetings and a brief suspension of business beginning at 11 a.m. Though the actual legal federal holiday was approved by Congress in 1938, it wasn’t until 1954, following World War II and the Korean War, that Congress replaced “Armistice” with “Veterans”, thereby amending the original act to commemorate November 11th as a day in America when veterans of all wars are honored.

Today, Veterans Day is a celebration to honor all of America’s veterans for their patriotism, love of country, and willingness to serve and sacrifice for the common good. It is also a day for reflection – for remembering.

Whether you wear the uniform today, or wore it decades ago, veterans represent a fundamental truth. It’s not the powerful weapons that make our military great. It’s not the sophisticated ships, aircraft, missiles, rockets, satellites that make us the most advanced. The true strength of our military is the spirit and skill of our Soldiers, Sailors, Airmen, and Marines.

In every generation, from the Revolutionary War to this very hour, brave Americans have stepped forward and served honorably in the Armed Forces of the United States. Every one of them deserves the admiration of our entire country.

So, today, it is our privilege to say “thank you” to all of our American veterans, for their quiet courage and exemplary service – to let them know we are grateful and acknowledge their many sacrifices and accomplishments.

Yesterday Mr. Hicks gave me a tour of these grounds – introducing me to some of these heroes who rest here and gave their lives in support of Operation Torch. One of those is a Silver Star recipient, Captain Robert H. Landess.

Captain Landess served with the 26th Infantry Regiment and was awarded the Silver Star for his actions in Algeria during Operation Torch.  He died on November 10, 1942 – representing one of many of our brave men and women – through the years – who did not come home. Captain Landess answered the call and we remember him today.

Our military members continue to serve long after they take off their uniform. Veterans are seen across our nation serving as leaders in both public and private industry; in our three branches of government – including here in Tunisia as part of the Department of State and the American Battle Monuments Commission; volunteering and serving in jobs that give other veterans the care they deserve; and when America’s heroes are laid to rest, they are there as a reminder of their service, sacrifice, courage and contributions to our grateful nation.

I’d like to read a passage from President Abraham Lincoln’s second inaugural address delivered March 4, 1865, as the Civil War was nearing its end:

“With malice toward none, with charity for all, with firmness in the right as God gives us to see the right, let us strive on to finish the work we are in, to bind up the nation’s wounds, to care for him who shall have borne the battle and for his widow and his orphan, to do all which may achieve and cherish a just and lasting peace among ourselves and with all nations.”

President Lincoln’s words have stood the test of time, and serve today as a commitment to never forget our veterans who made sacrifices in our nation’s defense, as well as the families of those veterans who died in its service.

Veterans, you have done your duty – to your families, to your communities, to your fallen comrades, and to your country. You have honorably served your nation with great distinction and we can never say it enough.  For the service of veterans in both war and in peace – thank you.

And finally, my sincere thanks to our Tunisian hosts for the gift of this incredibly peaceful, final resting place, and for your continued friendship and partnership. Tunisia too has veterans we honor today – including those who have successfully fought against terrorists and violent extremist organizations that have sought to destroy Tunisia’s democracy.

This – for me – will always be a very memorable & powerful Veterans Day. Thank you.