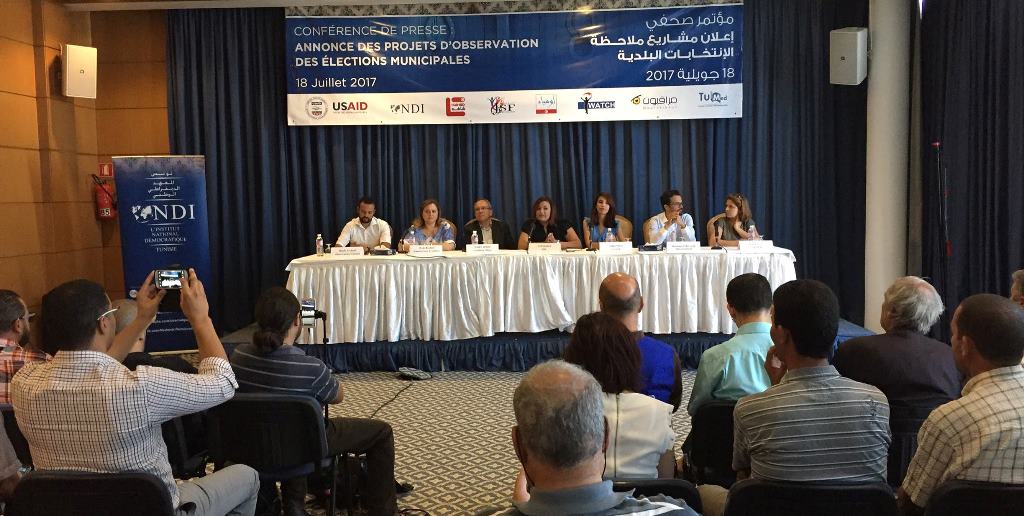 TUNIS (Tuesday, July 18, 2017) – As part of its program to support the monitoring of domestic election efforts in Tunisia, the National Democratic Institute for International Affairs (NDI), along with its six partner associations, officially launched today six projects aimed at observing the different aspects of the municipal elections process. Chahed Observatory, Youth Without Borders (JSF), Ofiya Coalition, IWatch, Mourakiboun, and Tunisian Mediterranean Center (Tu-Med) presented their short-term and long-term election observation initiatives in view of the municipal elections, which are planned for December 17, 2017. Collectively, and with NDI’s technical support, the groups will observe the electoral process from start to finish, thereby commenting on proceedings and providing independent feedback and recommendations to electoral actors. Ultimately, these efforts will help ensure transparency, safeguard credibility, and instill citizen’s confidence in Tunisia’s first democratic municipal elections. More specifically:

The event brought together representatives of Tunisian civil society as well as other primary actors within the Tunisian electoral sphere. At this occasion, NDI’s Senior Country Director, Ms. Marie-Ève Bilodeau, said that “NDI is pleased to work with these associations in view of Tunisia’s first democratic municipal elections that will involve the largest number of electoral candidates in the country’s history. This will not only engage election observers on an unprecedented level, but also provide them with an exceptional opportunity in the exercise of democracy.”

NDI’s financial and technical assistance for these election monitoring projects is part of a larger USAID-funded program of democracy assistance with the goal of ensuring citizen concerns are helping inform national-level decision-making and is made possible by the generous support of the American people.

For more information, contact Mrs. Assil Kedissi at 27 456 121 or by email at akedissi@ndi.org.

NDI is a non-partisan, non-governmental, non-profit organization working with local partners for the promotion of transparency and good governance around the world. NDI has been implementing programs in Tunisia since 2011, and currently provides technical assistance to the parliament, political parties, and civil society organizations. For more information, visit www.ndi.org.