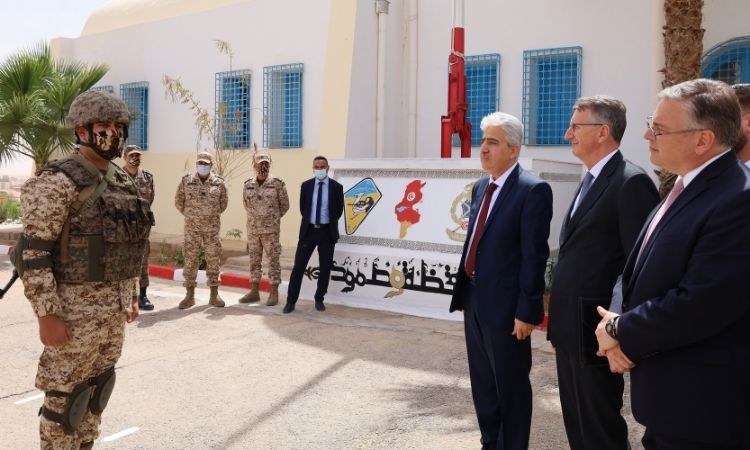 March 29, 2022–U.S. Ambassador to Tunisia Donald Blome and German Ambassador Peter Pruegel joined Minister of National Defense Imed Memmiche today at Remada Barracks to mark the completion of the second phase of the Tunisian Border Security Project (TBSP). The project aims to strengthen Tunisia’s border security capabilities to counter terrorism and cross-border smuggling threats. This project, valued at over USD100 million, was launched by the United States, Germany, and Tunisia in 2016 and involves the installation of an advanced integrated border surveillance system using remotely monitored sensors and providing training to operate the system.

“The Tunisian Border Security Project is a testament to Tunisia’s valuable role as a major non-NATO ally in providing security and stability across North Africa and the Mediterranean.  The completion of phase two of this project, illustrates the United States and Germany’s commitment to supporting Tunisia in safeguarding the sovereignty of its borders and in addressing the threats posed by terrorist organizations operating in the region,” said Ambassador Blome.

Ambassador Pruegel added that “the Tunisian Border Security Project is also a remarkable sign of the mutual trust that exists between our countries. The completion of Phase 2 will help to protect Tunisia from security threats”.

Since 2011, the U.S. has invested over $1 billion dollars in military cooperation with Tunisia focused on shared security interests in the region.  Mutual efforts include enhancing border security, ensuring freedom of navigation in the Mediterranean, providing logistical airlift for humanitarian aid missions, and supporting UN peace-keeping operations.  Upcoming exercises, including Phoenix Express and African Lion, are opportunities to advance shared interests in contributing to regional security and stability.

Germany has developed close cooperation with Tunisia and is among the key contributors to the Tunisian Armed Forces.  Areas of cooperation include border security, the “German-Tunisian Security Cooperation against Biological Threats,” as well as support to the construction of Tunisia’s military academy.  Since 2016, 45 projects have been supported by the German Ministry of Defense with an overall volume of more than 86 million Euros.

I am pleased to be here with you today to mark the completion of the second phase of the Tunisian Border Security Project in cooperation with the German Embassy.

This project is a testament to our commitment to ongoing counterterrorism cooperation and to ensuring Tunisia’s border security in the face of any terrorism or illegal trafficking threats.

Thanks to the remotely monitored border surveillance systems provided by the project, the Tunisian Army and National Guard will be better equipped to safeguard the sovereignty of Tunisia’s borders against any threat.  As Tunisia’s highest defense priority, the United States remains committed to partnering with Germany to complete phase three of this project.

In a time of geo-political turmoil, like what we are seeing with Russia’s invasion of Ukraine, and the persistent threat of terror groups in Africa, it is clear that only through strong partnerships will we overcome these shared threats, ensure regional stability, and support the people of Tunisia.