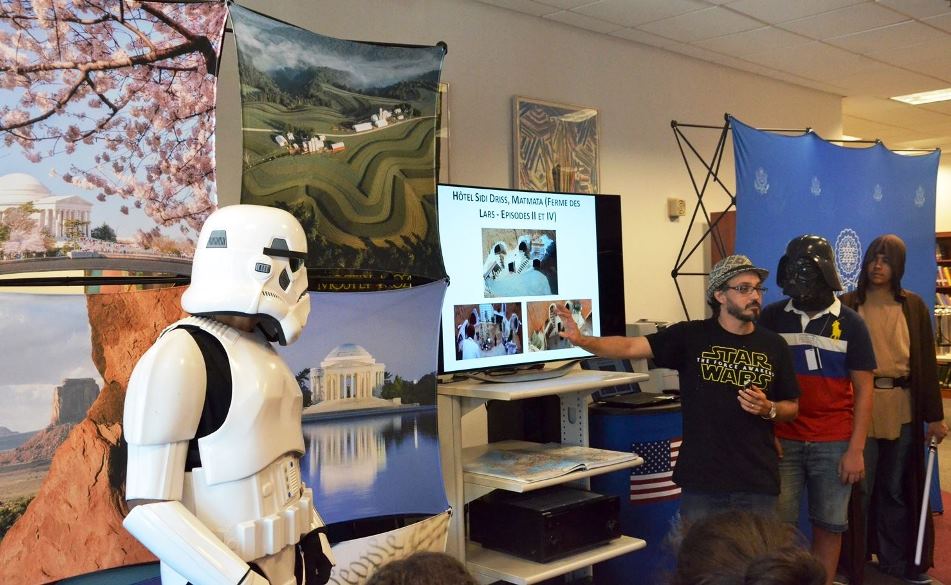 “A breath-taking experience,” “a saga that blows your mind,” and a “fabulous journey that stirs the imagination beyond belief” were some of the ways fascinated young audience members described Star Wars Day at the Information Resource Center (IRC). To mark the 40th anniversary of the filming of the saga in Tunisia, the Tunisian Star Wars Fan Club shared with the audience clips from the movies focusing on the sites filmed in Tunisia. The association discussed its ongoing efforts to preserve these sites which remain significant tourist attractions for thousands of Star Wars fans around the world. The highlight of the event came when Star Wars music filled the space and Star Wars cosplayers came out from “nowhere” to take the kids on an inspiring photo journey which set the stage for a comic-drawing contest.

This amazing premiere event was also an opportunity for the Tunisian Star Wars Fan Club to let fans know about the Comic-Con which will take place for the first time ever in Tunisia September 2-4. For more information about Comic-Con, please visit their site at https://www.facebook.com/Comic-Con-Tunisia-315855438757558/
If you are interested in becoming an IRC member or finding out about future events at the IRC, please send an e-mail to IRCTunis@state.gov