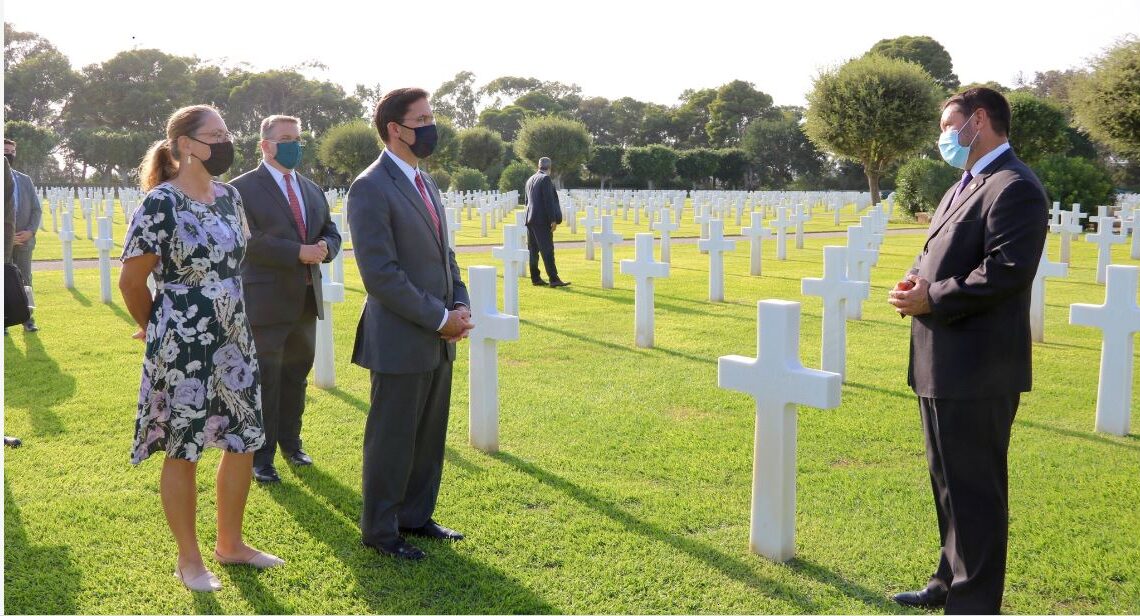 Thank you all for joining me this afternoon. I want to thank also The United States Embassy Tunis for hosting us today, and I want to thank the American Battle Monuments Commission for dedicating and maintaining these hallowed grounds.

It is an honor to be here with you in the North Africa American Cemetery, the eternal resting place of more than 2,800 brave men and women who fought in North Africa during World War II, and the more than 3,700 fallen heroes whose names are memorialized on the Wall of the Missing.

These Soldiers, Sailors, Airmen, Marines, Coast Guardsmen, and Merchant Mariners fought alongside our partners and friends, living up to their sworn oath to defend the Constitution and the United States of America, against the forces of evil, in the North African campaign. Not only did they make the ultimate sacrifice for our freedoms today, but their experiences in combat also taught us vital lessons that hold true nearly eight decades later – lessons that we must keep close in the years ahead.

The fighting in North Africa erupted when the Axis powers attempted to cut off the Allies’ supplies and lines of communication in the Mediterranean. Recognizing the threat of Axis control of the region, President Roosevelt launched Operation Torch in 1942, marking the first major entry of United States troops in this theater, and the largest American campaign on the continent. After suffering early losses in combat, the Allies adapted by building up their combat power, making changes in command, and coordinating air and naval forces to attack enemy positions and supply lines.

Cooperation among the Allies throughout nearly three years of fighting proved vital to victory in 1943, and the liberation of the Maghreb from Axis control. It secured North Africa and the Mediterranean’s strategic supply routes, and positioned the Allies to liberate Europe. Importantly, our victory demonstrated the power of like-minded nations standing arm-in-arm in the campaign against tyranny, and taught us that the way to win is to fight together.

Our collective success in World War II led to the creation of a post-war international order that has secured peace, stability, and prosperity around the world for the past 75 years. However, this global order, based on our shared values of liberty, sovereignty, and human rights, is under duress in this era of great power competition.

Today, our strategic competitors China and Russia continue to intimidate and coerce their neighbors while expanding their authoritarian influence worldwide, including on this continent. At the same time, violent extremists continue to pose a threat not only to regional stability, but also to our homeland. The United States’ enduring partnership with like-minded countries – including here in North Africa – is key to addressing these challenges.

Among our combined efforts, the Department of Defense helps strengthen our partners’ defense capabilities and blunt transnational threats. We help degrade violent extremist organizations, and deliver humanitarian aid and disaster relief to local communities. And, together we continue to counter the malign, coercive, and predatory behavior of Beijing and Moscow, meant to undermine African institutions, erode national sovereignty, create instability, and exploit resources throughout the region.

Our work, the United States’ work, is done in good faith and with a sincere aspiration for a more secure, stable, and prosperous Africa, including through political and economic development marked by free, fair, and reciprocal trade and investment – and respect for the sovereignty of all nations.

As the global partner of choice, the United States will continue to deepen our alliances and partnerships across the continent, including with Tunisia, where your democratic government and sovereignty have made much of our work in this region possible. We look forward to expanding this relationship to help Tunisia protect its maritime ports and land borders, to deter terrorism, and to keep the corrosive efforts of autocratic regimes out of your country – as we build closer ties in the spirit and service of those who first set us on this path.

Those men and women, the men and women laid to rest here, were heroes who hailed from every part of the United States, and from every walk of life, to fight for the United States, our Constitution, our shared values, and the ideals that now define our rules-based global order. They include Private Nicholas Minue, a Polish immigrant who gave up his rank of Sergeant in the U.S. Army to serve in combat during World War II, first in Algeria and then in Tunisia.

Private Minue was posthumously awarded the Medal of Honor for single-handedly destroying an enemy machine-gun position while under heavy fire, and continuing to charge forward until he himself was killed.

Other heroes whose names appear on the headstones and the Wall of the Missing are leaders such as Second Lieutenant James McCullin and First Lieutenant Sherman White, members of the Tuskegee Airmen. These pioneering African-American fighter pilots skillfully executed bomber escort and other missions that helped change the course of America’s military.

Other trailblazers include Privates First Class Rose Puchalla and Alice McKinney, members of the Women’s Army Corps, whose contributions throughout the war laid the groundwork for the strong, capable, and diverse force we have built and fostered ever since.

We stand tall thanks to the sacrifices made by these men and women who came before us. We honor them, and all those serving around the world today, who are making their own mark on history as they defend our values alongside our allies and partners. Together, much like we did when we arrived in this historic land in 1942, the United States will continue to protect the enduring cause of freedom, to safeguard our sovereignty and values, and to uphold the international rules-based order that has benefitted our countries, for generations to come.