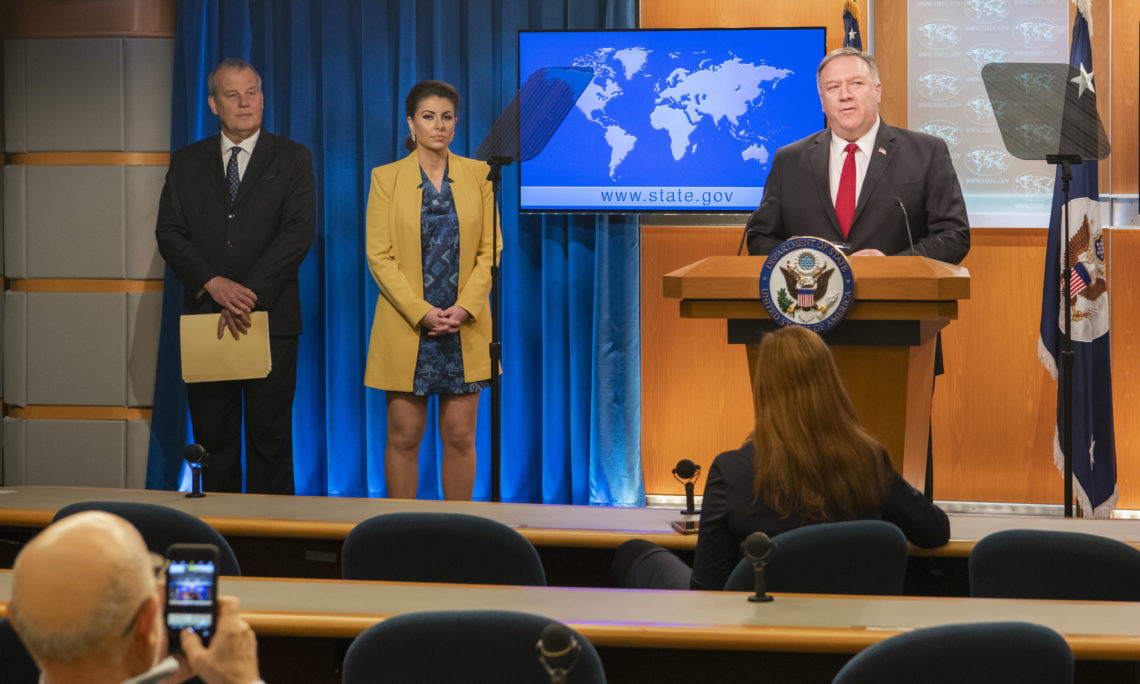 SECRETARY POMPEO:  Good morning, everyone.  Glad we’re all together, everybody healthy, everybody looking good, staying apart – all fantastic.

I wanted to start with just a few brief items here this morning, beginning in the Western Hemisphere.

First, I want to express my thanks to the dozens of countries that have expressed support for the new Venezuela framework that I announced when I was here last week.  The goal is to replace Maduro’s illegitimate dictatorship with a legitimate, transitional government that can hold free and fair elections, presidential elections to represent all Venezuelans.  It’s time for Maduro to go.

I’d also like to commend Guyana’s High Court for clearing the way for a nationwide recount of that country’s recent national elections as well.  We look forward to working with their elections commission and the international observer community to ensure that that process is free and fair, transparent, and credible.

Turning to Europe, a congratulations is in order for North Macedonia on becoming the 30th member of the NATO Alliance.  Its accession, which we marked in our virtual NATO meeting last week, strengthens the Alliance tremendously.  And it offers yet more proof that countries know aligning with free nations of the West is the best way to obtain security, stability, and prosperity for their own nation.

Now to the topic of greatest concern these days, the coronavirus.  I’d like to speak in some detail about the State Department’s 24/7, worldwide efforts to repatriate American citizens from around the globe.  It’s one of the most remarkable diplomatic missions in American history.  As of this morning, our team – working at great personal risk – has repatriated more than 45,000 citizens from across the world – 460-plus flights, 75 countries.

Nearly every day, incredible stories of our teams’ speed and tenacity getting our people home hit my desk.  These stories could be pulled from a Hollywood script, they’re remarkable.  I’ll share just a couple with you.

In Nepal, American tourists found themselves stranded near Mount Everest and other remote areas.  Our embassy obtained special permits from the government for 15-passenger commercial planes to fly in and out of that dangerous mountain terrain.  Embassy staff arranged buses to travel hundreds of miles to reach U.S. citizens and bring them back to Kathmandu to board flights that ultimately came back here to the United States.  We even helped one woman who was running low on medication reach a pharmacy, and evacuated her out of the first two flights that carried nearly 600 U.S. citizens and residents.

In Argentina, our people worked with foreign ministry contacts to help American missionaries pass through armed checkpoints.  They arranged for an asymptomatic elderly couple to be released from quarantine, so that they could get home to their loved ones.  And our team helped a couple expecting a child get back to the United States in a timely fashion.

We received this grateful note – it’s just one among many – from a woman whose mother was repatriated from Ecuador.  The note read, in part:  “[I] just want to say a special thank you to the U.S. Embassy for acting so efficiently and expeditiously to bring [home] my mom and her husband!  They were pretty much stranded… since all [the] airports are closed… and you guys came to the rescue!  You guys are the best!  God bless America!  [I am] so proud to be an American!”  End of quote.

I want the American people to have a better sense of the staggering logistical coordination and detail that goes into every one of these repatriation operations.  They’re truly the good work of not only our team that works across time zones, but works with the Department of Homeland Security, the United States Military, and our foreign partners at every level to get transport authorities and airline companies and medical teams all to where they need to be to get these people home.

Our teams are printing emergency passports to get these folks back.  We call hotels to find spaces for U.S. citizens to sleep to make sure they’re near the airport for the moment that the plane will arrive, and we make arrangements for flight crews.  And we provide Americans with letters for safe passage.  The list goes on and on.  It’s truly a great piece of work by the United States Government on behalf of the American people.

I want everyone to be reminded that America remains the world’s leading light of humanitarian goodness as well amidst this global pandemic.

Right now, given the great need for PPE in our own country, our focus will be on keeping critical medical items in the United States until demand is met here.  But the United States continues, even as we speak, to provide high-quality, transparent, and meaningful assistance to our partners all across the globe.

We do this because we’re good and generous people.  We also do it because viruses don’t respect borders.  When we help our friends abroad, it keeps us safe back here in the homeland as well.

Today I can confirm that we are prepared to commit an additional $225 million in health, humanitarian, and economic assistance to further boost response efforts worldwide.  That’s on top of the roughly $274 million in funding we’ve already deployed to 64 countries across the globe.  No country can match this level of generosity.

The new funding that I announced today will be used to reduce transmission through virus diagnosis, prevention and control; to bolster health systems; to prepare labs; to train healthcare workers; to increase awareness; and much, much more.

Our efforts to help these other countries to keep us safer here have already had an impact.  We’ve translated PSAs on fighting the virus into almost 50 languages.  We helped Guatemala set up its main hospital for COVID patients.  We’re supporting online learning for kids in Cambodia whose schools are closed.

Our long-term investments are also paying dividends.  An Egyptian nurse who graduated school on a USAID scholarship in 2019 is now treating COVID patients in that country.  She said, quote, “My education and the leadership training through USAID’s scholarship program prepared me for this [very] moment,” end of quote.

And we’re always looking for opportunities to partner with the private sector – one of the most powerful force multipliers of our nation.  We want to help these countries help themselves.

In Nigeria, we’ve partnered with a company called Airtel to reach more than one million citizens per day with voice and text messages on social distancing, safe hygiene practices, and other measures.

Along these same lines, it’s not just American government springing to help.  It’s American charities, too.  As just one example, in the Czech Republic, the U.S. firm Dukane IAS, headquartered just outside of Chicago, has voluntarily turned over a part of its production facility to make face masks for Czech first responders, senior centers, and other social service providers.

In Tunisia, Cisco donated video-conference equipment to government agencies so that they can remotely work during this lockdown to ensure the continuity of operations for their leadership team.

It’s a special country that we’re all part of.  No other country gives so much.

And on that theme, one more note.  Good news.  I’d like to draw your attention to the Ebola virus.

For almost two years now, the United States has led the global response to the latest outbreak of that horrible disease in the Democratic Republic of Congo.  Within one month from the outbreak, America deployed a Disaster Assistance Response Team and other experts who supported vaccination campaigns, diagnostic processes, testing and tracing, and more.  We’ve provided more than $569 million since the outbreak began to fight Ebola in the DRC and the neighboring countries.

Thanks to our efforts, I’m pleased to announce today that on April 12th the DRC is expected to declare this outbreak is officially over.  It will be 42 days – two full incubation periods for the disease –  since the last person tested negative twice and was released from an Ebola treatment center.  American assistance, the goodness of the American people, helped make this victory possible.  It’s an inspiration for our continued efforts to fight the COVID-19 pandemic.

Finally, one announcement with respect to Iraq.

As a force for good in the nation and as Iraq’s closest friend, the United States has proposed a Strategic Dialogue with the Government of Iraq to be held in middle of June.

With the global COVID-19 pandemic ranging and plummeting all revenues, threatening an Iraqi economic collapse, it’s important that our two governments work together to stop any reversal of the gains we’ve made in our efforts to defeat ISIS and stabilize the country.

The Strategic Dialogue will be led by my Under Secretary for Political Affairs David Hale.  And all strategic issues between our two countries will be on the agenda, including the future presence of the United States forces in that country, and how best to support an independent and sovereign Iraq.