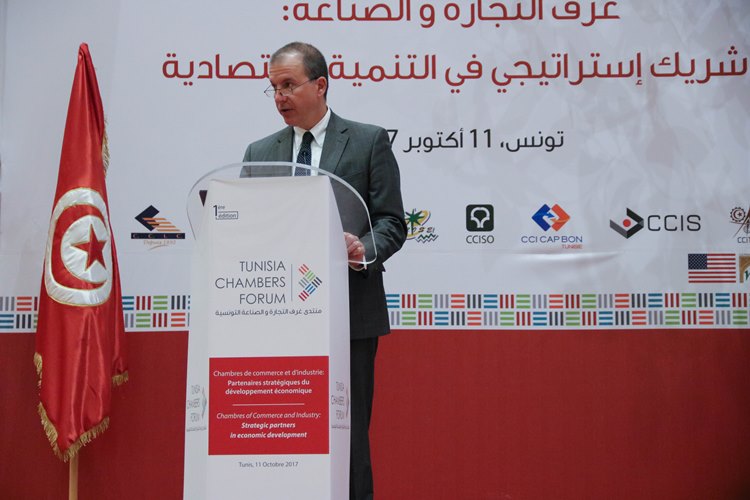 Ambassador Rubinstein is presently out of the country, but sends his greetings and wishes for a successful Forum.  I am pleased to represent him at this important event, and would like to thank Minister Behi for his remarks and invitation. I look forward to hearing from the other distinguished speakers, as well.

Supporting economic growth in Tunisia is a pillar of U.S. assistance, and the work that Deloitte has done with the Tunisian Chambers of Commerce is a great example of this.  Since 2012, with a total of nearly $6 million in U.S. support, Deloitte has worked with all eight Chambers to transform them into regional agents of economic development and regional opportunity. In undertaking this project, we have worked closely with the Ministry of Trade to support these chambers, and we share the Ministry’s vision for an economically prosperous Tunisia grounded in the standards of fair competition, inclusive growth, and equal opportunity.

As a result of U.S. investment, leadership by Deloitte, and the efforts of the Chambers themselves to improve their services, Chamber membership has increased nationally by 33%, and their revenues have grown by 13%. This is a higher growth rate than the Tunisian economy at large.

Collectively, the Chambers of Commerce have assisted 55 Tunisian companies to export their products into new markets, with organic olive oil, other agricultural products, construction and metal materials, and the expansion of new franchises, among other items. Based on a recent survey of members, the Chambers have reported that the services have increased member companies’ revenues by 18%. These new services have also resulted in 562 new jobs created throughout Tunisia. That is something we can all be proud of.

Equally important to us is facilitating the connection between business and government, so that local business owners are better able to communicate their needs to government officials. Another outcome of the program has been an increase in networking and cooperation between the regional Chambers, as well as within their local business communities.  The Chambers have developed an advocacy plan to reform the commercial registry service, and are continuing to develop other advocacy to focus on the regional level, such as the inclusion of women in entrepreneurial efforts. The Chambers are not just enabling good business, but also good participatory democracy.

Lastly, I would like to point out that these changes aren’t temporary.  The Chambers have moved from only providing government services to developing fee-based services that will help them become sustainable in the long term. Capitalizing on the U.S. government’s initial investment, the eight regional Chambers have brought in over 7 million Dinars in fee-based revenue, ensuring the sustainability of their growth as the premier drivers of local development and investment attraction in Tunisia.

As Tunisia moves forward with its decentralization process, the regional Chambers must continue to be the key drivers of local economic development, connecting their communities back to their elected and administrative government officials, advocating for needed change, and showing the world that Tunisia is open for business.  With that in mind, the U.S. government is pleased to continue its work with the Chambers by supporting their initiatives to become catalysts for export promotion and economic growth in Tunisia.  Thank you.