Thank you for being here today.  It is my honor to stand in front of you as we come together to remember America’s finest men and women who gave their lives in defense of freedom.

Memorial Day is America’s most solemn holiday, honoring the men and women who died while serving in the U.S. military.  Originally known as Decoration Day, it originated in the years following the Civil War as mourners would decorate the graves of the soldiers lost in battle with flags and flowers.  Memorial Day became an official federal holiday in 1971.

As we look out on these 27 beautiful acres of Tunisia lined with row upon row of white crosses and Stars of David, I am reminded of what President John F. Kennedy said: “A nation reveals itself not only by the men it produces but also by the men it honors, the men it remembers.” Today we pay tribute to the 2,841 fallen Soldiers, Sailors, Airmen, Marines and Coast Guardsmen buried here and to the 3,724 men and women missing in action whose names are on the wall behind me.  Every loss is a profound tragedy to both the family and community, and by honoring them we pay tribute to the ultimate sacrifice made by these service members and equally significant sacrifices made by their families.

I can think of no better place to honor the ideals and values of democracy and those who would fight and die to preserve them than right here in Tunisia, in this nascent democracy, where just outside these gates, and throughout this country, brave men and women – ordinary Tunisians – are today themselves performing extraordinary acts of courage in places like Ben Guerdan and Kasserine and Mnihla and Kebili to preserve their hard-won freedoms and liberties.  Their struggles are a stark reminder that democracy is not something to be taken for granted.  Democracy is not just a right, but a responsibility, a responsibility that we share.  Just as those whom we honor here today stood with the Free World in Tunisia so many years ago, so too do we pledge to stand with Tunisia now.

Thank you for joining us here today.  It is now my honor to introduce General Thomas Waldhauser, Commander of United States Africa Command. 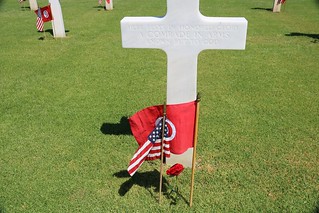