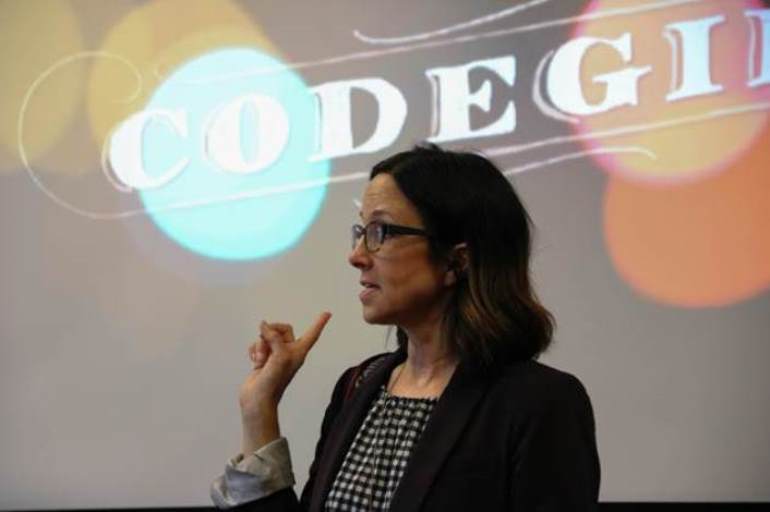 The American Film Showcase program was back in Tunisia in May, this time with award- winning director and producer Lesley Chilcott and her thrilling and heartfelt documentary CodeGirl. The film focuses on high school girls developing smart phone applications to solve social issues, trying to better their communities through technology and collaboration. Lesley’s camera followed Technovation teams from Moldova, Brazil, Nigeria, the United States and other countries.

During her visit, Lesley traveled with CodeGirl to Sousse, Sfax and Tunis to conduct screenings and engage in meaningful discussions afterwards with young people who are passionate about coding and filmmaking.

After the screening, one of the audience members in Sousse commented “I started a language learning app and I stopped a month ago, but now I am ‎going to finish it, because this is truly inspirational.”‎

In Sfax, Lesley was fortunate to visit the First Skills Club which is a computer science institution founded by a TechWomen alumna where some vibrant middle and high school students are members and mentors. One of the young women concluded that the documentary is about “girl power.” Among the good questions the film-making enthusiasts posed were specificities about the equipment Lesley used for shooting. Lesley challenged them to make their own 3- minute movies about a person in their lives that they admire, which the students took seriously and promised to work on during the summer.

In the Franklin Center in Sfax, and in other venues in Tunis, the interaction between Lesley and the audience touched upon thought-provoking topics like progress and equality. One example of an issue discussed by the audience was why the percentage of females studying engineering in Tunisia does not always correlate with the number of women working as engineers.

Connections were built during these events, not only between Lesley and Tunisians, but also Tunisians themselves who got to know scriptwriters, filmmaking enthusiasts and even Technovation competitors among them.

Congratulations to the Tunisian teams that competed in Technovation and good luck to those who may compete at the annual international pitch in Silicon Valley!