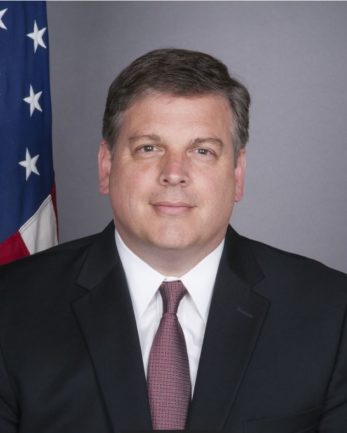 Donald Blome was sworn in as the U.S. Ambassador to Tunisia on January 9, 2019.

Previously, he served the Department of State as Director, Office of Arabian Peninsula Affairs (2013 – 2015), Political Counselor, Embassy Kabul, Afghanistan (2012-2013), Minister-Counselor for Economic and Political Affairs, Embassy Cairo, Egypt (2009-2012).  He also served as the Civilian Co-Director, Multinational Force Strategic Engagement Cell, Baghdad, Iraq (2007-2008) and as Political Counselor, Embassy Kuwait (2006-2007).  He served as Israel Desk Officer and Deputy Director in the Office of Israel and Palestinian Affairs (2001-2004).  Other assignments include Iran Desk Officer and overseas tours in Jordan and Saudi Arabia.  Before joining the Foreign Service, he practiced law in Chicago, Illinois.

Ambassador Blome earned a B.A. and a J.D. from the University of Michigan, Ann Arbor.  He is married to Debra Blome, and they have three children.