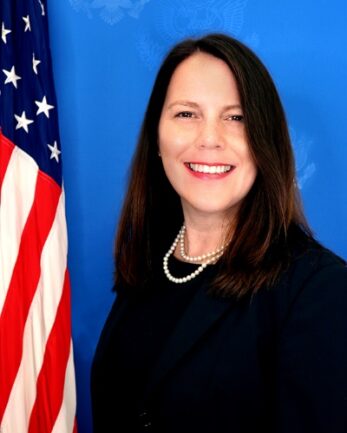 Her previous assignments include Director of the State Department’s Office of Caucasus Affairs and Regional Conflicts, Deputy Director of the Office of Arabian Peninsula Affairs; Deputy Political Counselor at U.S. Embassy Baghdad; and Deputy Political Advisor at the U.S. Mission to NATO, where she oversaw NATO’s relationships with its partners in the Middle East and North Africa. She earlier served in various positions in Islamabad, Nur-Sultan, Sarajevo, Moscow, and in Washington in the State Department’s Bureaus of Near Eastern and Political-Military Affairs.

Ms. Franceschi was born and raised in Sonoma County, California.  She holds a BA from Swarthmore College and a MALD from the Fletcher School of Law and Diplomacy at Tufts University.  She is the recipient of numerous U.S. State Department awards.