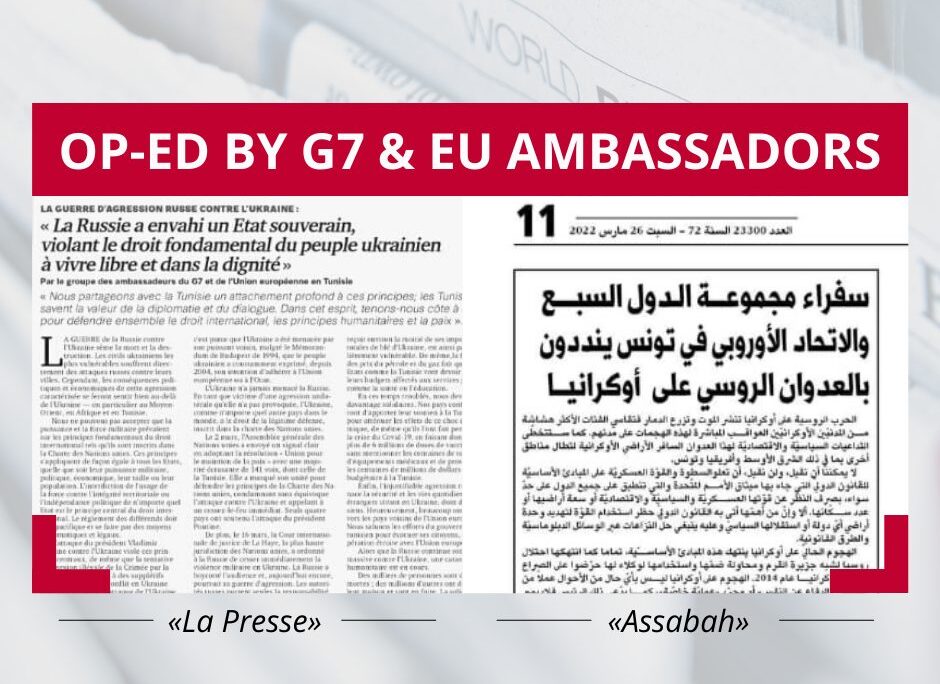 Russia’s war against Ukraine is sowing death and destruction. The most vulnerable of Ukrainian civilians are suffering the direct consequences of Russian attacks on their cities. The political and economic fallout of this blatant aggression will be felt far beyond Ukraine, including in the Middle East, Africa, and Tunisia.

We cannot, and will not, accept that power and military strength stand above the fundamental principles of international law as enshrined in the Charter of the United Nations. These principles apply to all States equally, regardless of their military, political and economic power or their territorial size or population. It is the foremost principle of international law that the use of force against the territorial integrity or political independence of any state is prohibited. Disputes should be resolved peacefully, through diplomatic and legal means.

The current attack on Ukraine violates these core principles, as did Russia’s occupation and attempted annexation of Crimea and its use of proxies to instigate the conflict in Eastern Ukraine in 2014. The attack on Ukraine is by no means an act of « self-defense » or a mere « special operation », as President Vladimir Putin claims. Russia has invaded a sovereign state, violating the fundamental right of the Ukrainian people to live in freedom and dignity. Moreover, Russia has put its nuclear arsenal on high alert and threatens countries who come to Ukraine’s aid.

The Russian narrative that Ukraine’s desire to join NATO poses a security threat to Russia is a complete fallacy. Quite to the contrary: It was because Ukraine had been threatened by its more powerful Russian neighbor, despite the political assurances that Russia had committed to in the 1994 Budapest Memorandum, that the Ukrainian people have constantly voiced their support for NATO and EU membership since 2004.

Ukraine never threatened Russia. As the victim of a one-sided and unprovoked aggression, Ukraine, like every country in the world, has a right to self-defense, enshrined in the UN Charter.

The United Nations General Assembly sent a clear signal on March 2 by adopting the « Uniting for Peace » resolution with an overwhelming majority: 141 countries, including Tunisia, stood united in support of the principles of the UN Charter, unequivocally condemning the attack on Ukraine and calling for an immediate ceasefire. By contrast, only four countries supported Putin’s attack.

Moreover, on March 16, the International Court of Justice in The Hague, the highest court of the United Nations, ordered Russia to immediately end military violence in Ukraine. Russia boycotted the proceedings and, until today, continues its war of aggression. The responsibility for this unnecessary bloodshed and for the deaths on both sides lies solely with Russian leadership.

The war against Ukraine not only violates the UN Charter, it also throws the global economy, still reeling from the COVID-19 pandemic, in further turmoil. Vital trade is disrupted and the prices of basic goods are soaring. As over 40 percent of Ukrainian wheat and corn are exported to the Middle East and Africa, regional supply and food security for millions of people is at stake. Tunisia, which receives roughly half of its total wheat imports from Ukraine, is particularly vulnerable. Likewise, the loss of Russian and Ukrainian tourists, as well as the skyrocketing cost of oil and gas, means that governments like Tunisia have less money to spend on public goods such as hospitals or schools.

In these turbulent times we need more solidarity. We will continue to work with Tunisia to mitigate the effects of this economic shock, as we consistently did throughout the COVID-19 crisis with more than six million doses of vaccines, hundreds of tons of medical supplies and protective equipment, as well as hundreds of millions of dollars in budgetary aid.

Finally, Russia’s unprovoked attack put at risk the lives of foreign citizens living in Ukraine, among them Tunisians. Fortunately, many were able to flee to safety in neighboring EU countries. We commend the Tunisian government for its efforts to evacuate its citizens, in close cooperation with the EU.

As Russia continues its massive attack on Ukraine, a humanitarian catastrophe is unfolding. Thousands have already died. Millions have fled their homes and are on the run. International solidarity with the Ukrainian refugees is impressive.