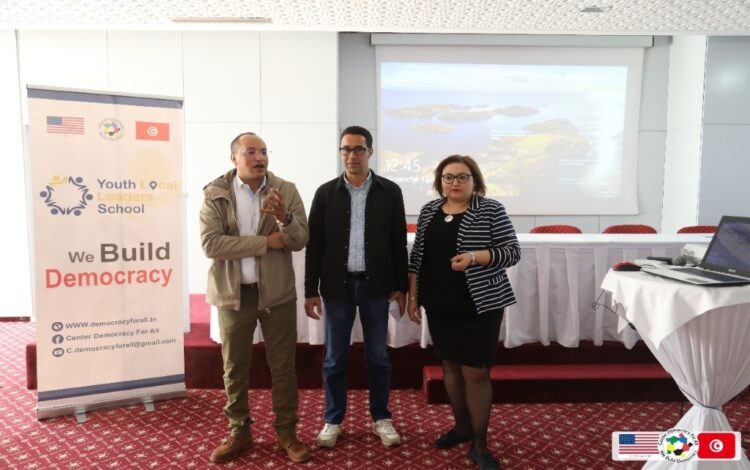 Leaders for Democracy Fellowship (LDF) alumna, Amira Marzouk is no stranger to active civic and political engagement.  Her journey started in 2012, where she was elected as member of  the Pan African Parliament and served as a member of the Human Rights Commission.  Having acquired a rich international background from her law studies, she worked within the investigation committee in Sudan and South Sudan. Amira was the only woman representing Tunisia at the Pan African Parliament from 2012 to 2014.

Amira believes that her purpose goes beyond political life; she understands that her abilities allow her to further contribute to society and her community.  Thus, she pursued her interest in  civic engagement and  applied for the LDF Middle East Partnership Initiative (MEPI) in 2016.

Amira described her MEPI experience as a turning point in her life:

She explained that the LDF courses gave her a different perspective of the social and political situation in Tunisia:

“The courses allowed me to develop a richer knowledge of democratic consolidation methods, and conflict resolution, which are currently two major themes in Tunisia’s political situation.  It also helped me learn more about campaigning, working efficiently with the media, and developing public image in the political sphere”

She acknowledged the role of her teachers in shaping her experience and the importance of the network she built during her fellowship:

“We continue to collaborate and support each other in our civic, and political journeys.”

During the second phase of the program, Amira worked with the Arc En Ciel NGO in Lebanon, an organization that emphasizes the social and economic integration of marginalized people and communities.

Following the end of the LDF program, Amira came back to Tunisia, carrying a new set of ideas and objectives.  She used her new skills to develop of youth and increase their participation in political life. Specifically, she advocated for a young independent electoral list called “Einek Ala Bledek” during the 2018 municipal elections. Amira worked relentlessly to ensure a successful campaign.  She contributed to the creation of the list’s electoral statement and campaign strategy.  Then, she worked on training the candidates on local authorities and public image branding.  She used the knowledge she acquired during her LDF courses to mentor the candidates on how to develop their public persona, how to talk to the media, and how to  convey their messages in a way that appeals to voters.  Additionally, she trained the list’s electoral observers.  This list successfully received 4,450 votes, which guaranteed them eight seats in Monastir’s municipal council.  In addition, the head of the list was elected Mayor of Monastir:

“I consider this electoral experience to be one of  the achievements I am most proud of. We were running against the two strongest parties in the country, and the concept of independent lists was still new and unpopular among people.  Despite all challenges, we worked really hard and achieved great outcomes”

Amira’s passion and dedication to helping youth actively participate in the political life did not end there.  Along with a team of State Department exchange program alumni, she received a MEPI grant to implement a project called “Youth Local Leaders School.”  The project aims to promote democratic citizenship and civic engagement among young people and support their political participation to make their voices heard in society.  The project encourages youth to assume leading roles and responsibilities as citizens.  It also works to strengthen the link between the municipality and citizens through a comprehensive understanding of the local context. Lastly, it assists young leaders and activists from different regions of Tunisia to participate effectively in the decision-making process and management of local and national affairs.