Home Page d'accueil | News and Events | MEPI Alum of the Month: An Ardent Advocate for Youth and Local Development 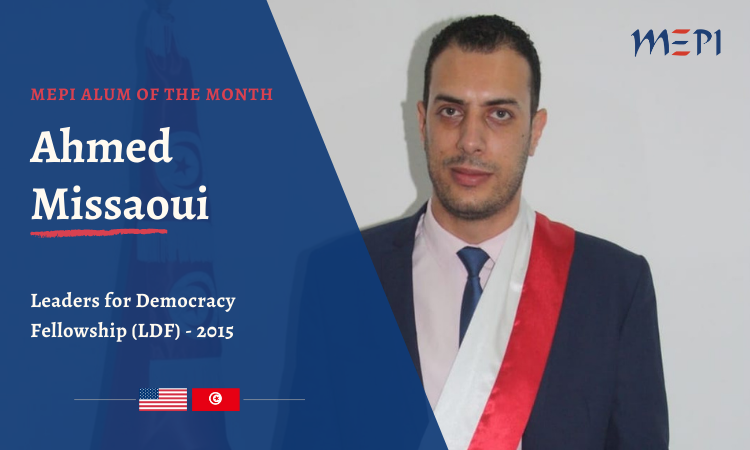 Our first featured alum in 2022 is Ahmed Missaoui, a social and political activist who participated in the U.S. Embassy’s Leaders for Democracy Fellowship (LDF) and International Visitor Leadership Program (IVLP). Ahmed is currently a municipal councilor in Sfax and President of the district of Sidi Mansour.

Ahmed has worked on several youth engagement initiatives, such as the BuildUp Tunisia project, which built the capacity of young entrepreneurs, and the Tunisia Accountability and Political Participation project, which improved young people’s involvement in the Tunisian elections. Both projects were funded by the Middle East Partnership Initiative (MEPI). The embassy admires his active participation and involvement with MEPI programming following his participation in the MEPI LDF program. Ahmed shared: “I feel my mission in this world is to be active socially, act as an example to younger generations and always keep trying to restore young Tunisians’ faith in public service.”

Ahmed’s leadership and activism started when he was a student at the Sfax School of Sciences, where he was elected as a student government representative in 2008. He subsequently founded the Science Without Borders Club at the University of Sfax. Following graduation, Ahmed furthered his acumen in activism by studying political marketing, local governance, dialogue facilitation and public speaking.

After winning the 2018 municipal elections in Sfax, Ahmed contributed actively to the development of his local community and currently plays a major role in the realization of community projects in Sfax. During the COVID 19 pandemic, he has used his leadership skills to gather civil society and other stakeholders to create a donation center to help the most vulnerable people.

Ahmed’s involvement with Embassy programs continues as he recently participated in MEPI’s Arab American Institute Foundation Peers exchange program, which connects elected officials in Sfax with those in Philadelphia, PA.  Through this program, he gained support for the LINATACHAREK project, which created an Internet radio station to strengthen citizen communication with their municipal leaders.

If you ask Ahmed for a solution to advance the country, he will immediately say: “Tunisia will overcome all its crises by counting on its’ active youth in all fields.”