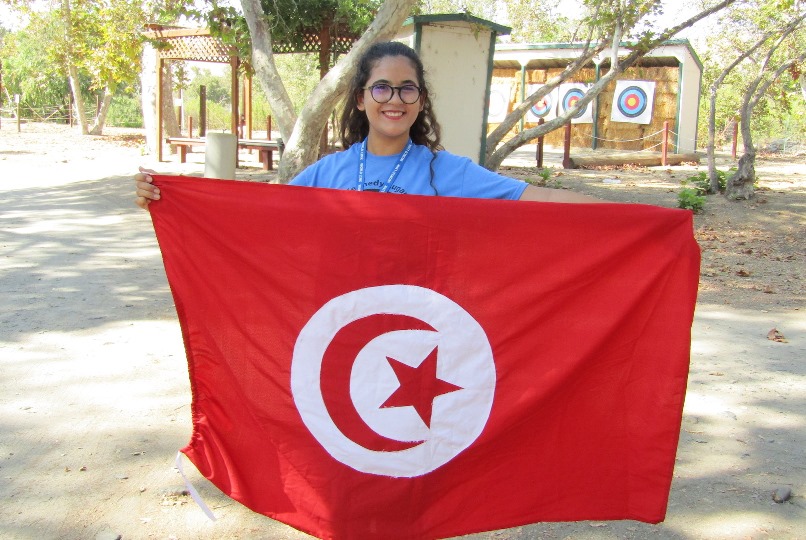 If there is an opportunity to help others, January YES Student of the Month, Hiba Kammoun (YES 2016-2017, Tunisia, hosted by World Link in Visalia, CA), will volunteer for it. Hiba has also been a great representative of Tunisia, her home country, and undertaken a demanding schedule of extracurricular activities at Mount Whitney High School in Visalia, CA.

Hiba kicked off the December holiday season with a service project in which she collected and donated 127 sweaters to the Visalia Rescue Mission. She could be seen around Visalia handing out flyers to collect donations for canned goods and gently used sweaters for her holiday project. She served food to the homeless at the rescue mission and went back to serve a New Year’s Eve meal. She traveled to the local veterans’ homes to hand out presents and sing carols. With her school’s Key Club, she rang the bell for the Salvation Army and organized donations at their local warehouse. Hiba said of her holiday service, “I feel so proud to be able to accomplish all [these activities] and put a smile on people’s faces during this busy time of our exchange year.”

Hiba’s December fell on the heels of another fantastic month where she gave 19 presentations during International Education Week, filled with ways to make her culture memorable. More recently, she represented her country at “World Thinking Day” for area girl school troops, creating information cards about Tunisia to hand out. She also volunteered at the World Ag Expo in Tulare, CA as an international guest greeter.

Hiba has enjoyed volunteering after school with children at the Boys and Girls Club. She was put in charge of a cabin during a five-day outdoor camp to teach youth about science and conservation. She has joined her YES and FLEX student cluster to help serve meals to veterans and listen to their stories while playing rounds of BINGO.

At Mount Whitney, Hiba joined the drama club and performed in the school musical “Sister Act.” After playing on the school basketball team, she decided to try competitive swimming as well. She joined the swim team and practices two hours each day after school.

Despite her busy schedule and the 123 hours of volunteer service she has already logged, Hiba is looking ahead to Global Youth Service Day in April. Her plan is to partner with another World Link exchange student from Egypt to collect and ship gently used or new shoes to the poor in their home countries. No doubt there will be many more activities to follow.

Congratulations, Hiba, on your busy and productive YES year!