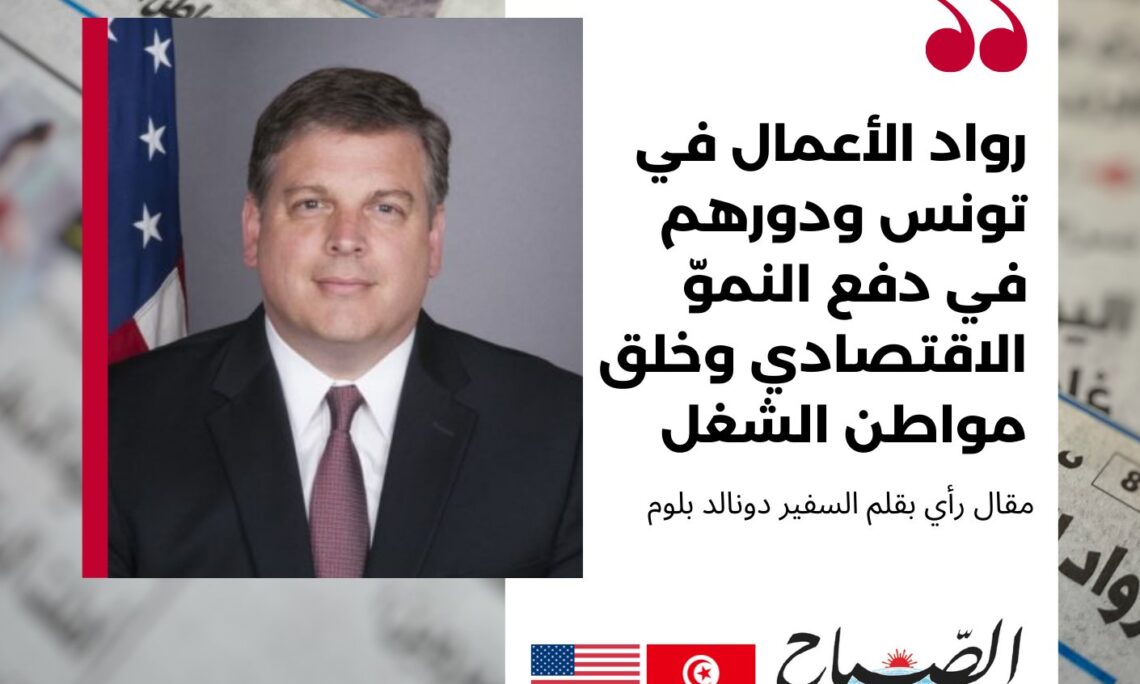 Entrepreneurs Are Critical to Unlocking Economic Growth and Jobs Across Tunisia

As I traveled around Tunisia the last three years, some of my most memorable interactions have been with entrepreneurs whose drive and passion for innovation is a constant reminder of the country’s tremendous potential.  These Tunisians are fueled not just by a desire for personal success but for a more prosperous future for their communities and their country.

Today, Tunisians face high unemployment, and an increasing number of young innovators are considering emigration.  The Tunisian economy requires substantial reforms that have been delayed far too long.  The U.S. government stands ready to support these reforms, consistent with the democratic will of the Tunisian people.  Throughout this crucial period, it will be essential that Tunisia prioritizes its support to entrepreneurs, one of its most valuable competitive advantages.

It is helpful to remember that Silicon Valley giants like Apple, Google, and Microsoft were not overnight successes.  They began with a handful of young entrepreneurs who had an incredible amount of ingenuity and perseverance, and who were supported by a regulatory environment that fosters innovation.  Eventually, these small companies became some of the world’s largest multinational corporations.  These three former startups alone are now responsible for directly employing nearly half a million people around the world.  There is no doubt there are Tunisian entrepreneurs with the talent to create similar companies and job growth — I have met them.

There are plenty of young Tunisians who show every bit of the energy and drive of these Silicon Valley pioneers, and the ingredients for creating a thriving and inclusive entrepreneurship ecosystem already exists.  Tunisian policymakers can support the success of small and medium businesses across Tunisia.  This was proven with the 2018 StartUp Act — a significant achievement that helps innovators navigate the complicated process of launching a new business.

How can Tunisia build on this foundation and meet the current demands of entrepreneurs and small business owners?  First, the implementation of economic reforms that promote private sector job growth – particularly in the interior – will be essential for the future prosperity of every Tunisian.  All potential investors examine the ease of doing business when considering the location of new operations and partnerships.  Given the role that Tunisia could play as a “gateway to Africa,” swift action is needed to remain competitive in the region.

Second, Tunisian entrepreneurs need the freedom to operate in global e-commerce on equal footing with their counterparts around the world.  This includes the ability to freely pay vendors without time-consuming and costly manual procedures.  Access to global e-payment platforms to easily make purchases, and more importantly, to be paid by customers, is critical.  Adapting the foreign exchange code restrictions to meet the needs of the global business environment will also attract new funding from foreign investors who are accustomed to freely and quickly allocating capital.

Third, Tunisian entrepreneurs, especially those in the tech sector, will increasingly require an information communications technology (ICT) infrastructure that provides robust data security.  Entrepreneurs should not have to fear the loss of valuable intellectual property that took years to create as a result of untrusted ICT infrastructure or cyber-attacks.  Foreign investors will also require the peace of mind that communications and data-sharing with local partners are safe and secure.  New cybersecurity policies can be shaped in a way that unlocks, rather than inhibits, opportunities for tech startups.

The U.S. Embassy has intensified its engagement with entrepreneurs and the government in recent years, and it has become a core piece of our economic assistance.  Through USAID’s $69.5 million JOBS program, we are assisting more than 30,000 small- and medium-sized businesses nationwide increase their sales by 1.5 billion TND and create approximately 42,000 new jobs.  We are providing thousands of young entrepreneurs opportunities to learn from top American and Tunisian experts through our projects with Columbia University, Deloitte, Endeavor, and Open Start-up Tunisia.  We are facilitating efforts to link Tunisian start-ups to U.S.-based venture capitalists, including at the upcoming SelectUSA Summit in June.  And just last week, I launched a USAID partnership between the Arab Tunisian Bank and the International Development Finance Corporation for a $35 million program to expand and accelerate commercial lending to small and medium size businesses that do not typically have access to bank loans.

But more is needed, and the U.S. government is ready to bolster its support to entrepreneurs and small business owners across Tunisia.  Similarly, we count on Tunisia’s leadership to help create a more open environment for entrepreneurs and to eliminate the barriers that keep them from creating the jobs the country seeks.  Every Tunisian deserves economic security and the ability to achieve a future that offers increased prosperity.  Let’s act now to make sure the key drivers of tomorrow’s economic growth, Tunisia’s entrepreneurs, have the tools and the regulatory environment needed to fulfill this vision.