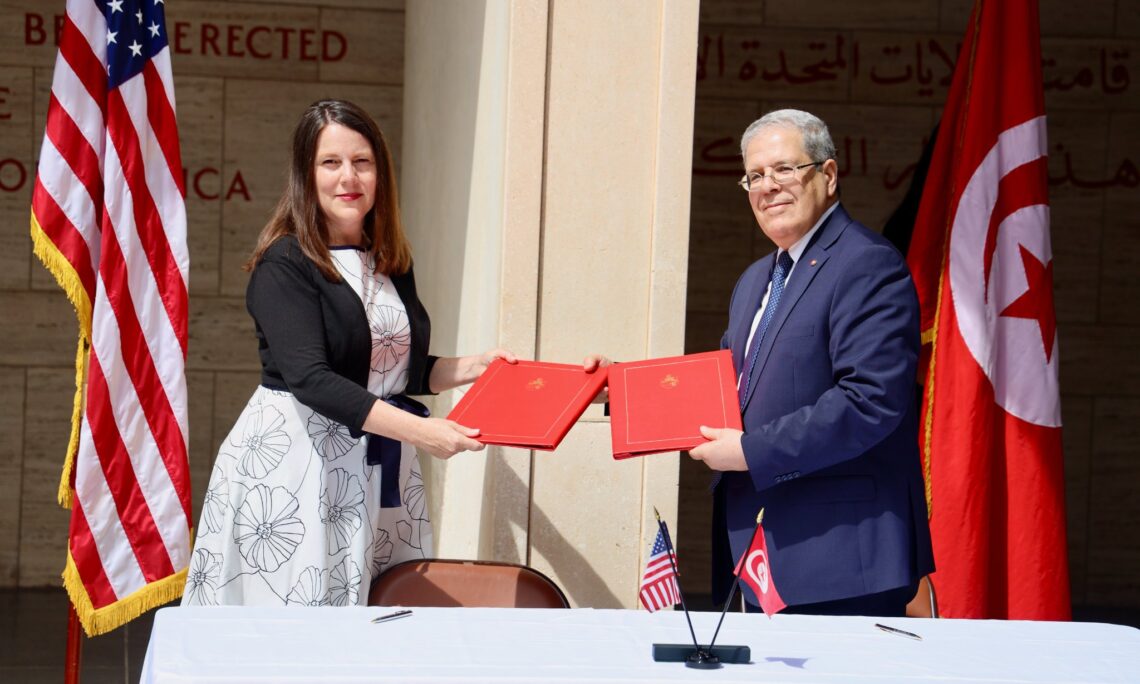 TUNIS – On Memorial Day May 30, 2022, U.S. Embassy Tunisia Chargée d’Affaires, a.i. Natasha Franceschi signed a historic Memorandum of Understanding (MOU) with Tunisian Foreign Minister Othman Jerandi at the North Africa American Cemetery in Carthage, Tunisia. The MOU paves the way for the disinterment of the remains of unidentified American service men and women who gave their lives in the service of the United States during WWII’s North Africa campaign. The agreement will allow the repatriation of “unknown” American soldiers for identification and reunification with family, bringing long-awaited closure to loving families after more than half a century.

“We owe our fallen heroes and their families a profound debt of gratitude. Today’s historic agreement will ensure American service men and women who gave their lives to defend our freedom are recognized and honored for the ultimate sacrifice they gave to our country,” said U.S. Embassy Tunisia Chargée d’Affaires Natasha Franceshi.

Many of the patriots buried at the cemetery served with distinction throughout the North Africa campaign during World War II. The battle for Tunisia marked a turning point in the war as it paved the way for the Allied liberation of Europe.

Brian Pearl, Director for Policy & Plans, Defense POW/MIA Accounting Agency (DPAA) joined the ceremony and reiterated the importance of the agreement in fulfilling DPAA’s mission in recovering American military personnel.  DPAA actively researches unknown case files to establish a probability of identification and repatriate remains to U.S. based laboratories where advances in forensic science technology, along with increased capacity for genealogical, anthropological, and military history research, are used to identify individuals.

The Cemetery is part of the American Battle Monuments Commission (ABMC) which was established by the U.S. Congress in 1923 to commemorate the service of America’s armed forces through 26 permanent overseas American military cemeteries and 32 federal memorials, monuments, and markers, which are in 17 countries. .

Minister Jerandi, Madame Mayor of Carthage, Director Pearl, esteemed guests, it is an honor to participate in today’s historic signing of a Memorandum of Understanding between the Government of the United States of America and the Government of the Republic of Tunisia.  The signing of this agreement today will allow us to disinter the remains of five United States Military personnel buried here at the North Africa American Cemetery in Carthage as unknown soldiers and return them to the United States for identification and recognition for their ultimate sacrifice.

Today’s signing is the culmination of several years of negotiations and it could not have come on a more appropriate day – Memorial Day, a day to pay solemn tribute to patriots who gave their lives in devotion to our country.  While the nature of war has changed over the years, the values that drive our brave men and women in uniform remain constant:  Honor, Courage, and Sacrifice.  Standing here is a poignant reminder of the heavy price paid to protect not only American freedom but also that of our Allies.

This cemetery is the final resting place for thousands of Americans who showed remarkable courage and fortitude in the face of seemingly insurmountable challenges.

Many served with distinction throughout the North Africa campaign during World War II.  As we stand here at this historic site among the ruins of ancient Carthage, we remember the battle for Tunisia which marked a turning point in the war as it paved the way for the Allied liberation of Europe.

Today, we honor the fallen heroes memorialized in this cemetery by showing our steadfast commitment to recognize those who gave their lives for freedom.  Thanks to this agreement, we hope to name and recognize five more.

Our two countries understand the price for freedom and together we remain committed to our ideals, our democracies, and our friendship which protects both.

No place is more symbolic of the outstanding partnership between our nations than the North Africa American Cemetery and Memorial.

In this oasis of peace and tranquility, we stand on Tunisian soil that eternally embraces thousands of Americans who made the ultimate sacrifice in the name of peace and freedom.