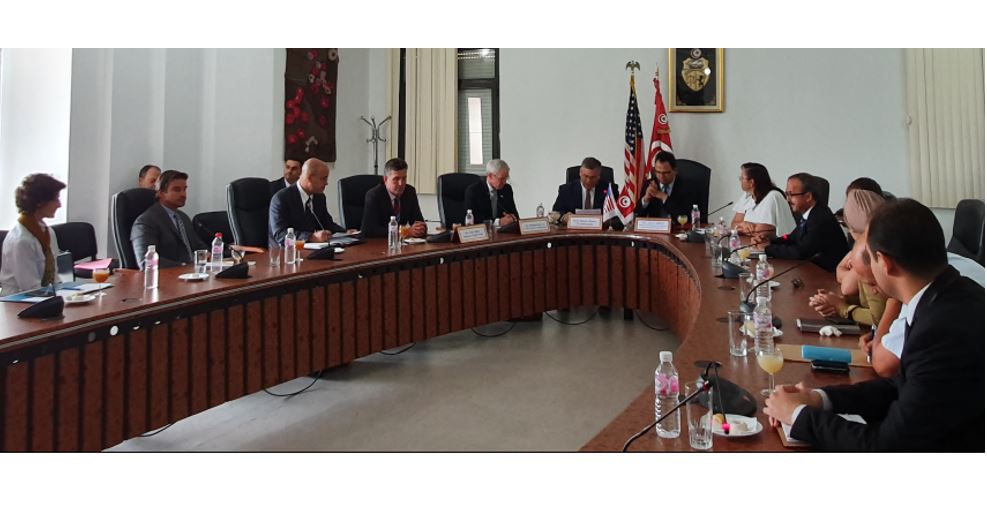 U.S. SIGNS LANDMARK AGREEMENT WORTH UP TO ONE BILLION DINARS WITH THE GOVERNMENT OF TUNISIA

(DOAG) with the Government of Tunisia for up to one billion dinars.  It will support increased private sector employment and democratic consolidation in Tunisia, and covers the period 2019-2024.

The Minister of Development, Investment and International Cooperation, Mr. Zied Ladhari, presided over the DOAG signing ceremony on August 28, and was accompanied by the USAID Assistant Administrator for the Middle East, Michael Harvey, the U.S. Ambassador to Tunisia, Donald Blome, and the USAID/Tunisia Principal Officer, Peter Riley.  USAID also announced that it was upgrading its presence in Tunisia to full-scale bilateral USAID Mission.

The DOAG represents the first-ever comprehensive bilateral development grant agreement between the U.S. Government and the Government of Tunisia, and outlines the US Government’s long-term commitment to support activities that strengthen Tunisia’s democracy, governance, and economic growth across the country. Activities funded under this Agreement will be implemented in close coordination with the Government of Tunisia.

“The U.S. Government is committed to supporting the Government of Tunisia’s efforts to strengthen its democracy through good governance and economic growth,” said Assistant Administrator Harvey. “We believe that this Agreement demonstrates our steadfast commitment to Tunisia’s development goals.”

Ambassador Donald Blome added, “This agreement marks a tremendous milestone for the U.S. – Tunisian partnership, and highlights our confidence in Tunisia’s future.”

Since 2011, the United States has provided more than $1.5 billion in overall foreign assistance to Tunisia.

It’s an honor to be here to celebrate this important cooperation agreement between the Governments of Tunisia and the United States.

This agreement marks a tremendous milestone.  The partnership between Tunisia and the U.S. Agency for International Development, or USAID, first began in Tunisia in 1957.  After a period of absence from 1995, USAID reestablished an office in 2014 to support the goals of the revolution.  The agreement we sign today elevates this relationship, and reflects the United States’ confidence in the Tunisian people.

The Ministry of Development, Investment and International Cooperation played a significant role in the successful formalization of this agreement.  I want to extend my appreciation to Minister Ladhari for his role, for his coordination with other ministries, and for partnering with USAID to take this agreement over the finish line.

I now have the pleasure to introduce the Assistant Administrator for the Middle East Bureau at the U.S. Agency for International Development, Michael Harvey.  Assistant Administrator Harvey arrived in Tunis a few days ago with the purpose of formally signing USAID’s first-ever Development Objective Grant Agreement with Minister Ladhari, and to see for himself the successful partnership between the Ministry and USAID.

Your Excellency Minister Zied Ladhari, thank you once again for your hospitality and for your commitment to our bilateral relationship.

Thank you and congratulations.

It is an honor for me to be here today representing the United States Agency for International Development.  Today, we mark a significant milestone in U.S. – Tunisia bilateral relations through the signing of this historic agreement.  We are together today to reaffirm our commitment to the people of Tunisia, as evidenced not only by this agreement, but also through officially re-establishing a full USAID mission in Tunisia.

Taken together, this represents a significant milestone in USAID’s partnership with Tunisia since the early days of the Revolution.  The United States has already provided more than $1.5 billion in foreign assistance in support of Tunisia’s democratic consolidation, economic growth and security since 2011.  Today we demonstrate that the United States plans to continue building this partnership with Tunisia for the long run.

Through our partnership, USAID is helping Tunisian businesses create jobs, improve public financial management, and enhance the business environment.  Our assistance is helping to create thousands of new jobs, at least half of them for youth and women.  USAID is also improving workforce skills of tens of thousands of young Tunisians in underserved parts of the country.  In all of our economic growth programming, we work in partnership with the private sector to ensure that results are sustainable long after our assistance ends.

We has supported Tunisia in its efforts to strengthen its democracy over the past eight years, and we will continue to stand with Tunisia as it moves forward.  You have made great strides in advancing an accountable political system, and building resilient communities across the country.  I am encouraged by Tunisians’ commitment to carry forward this progress.  USAID is honored to support you on this journey through our work in municipal service delivery, community resilience, and citizen engagement.

Minister Ladhari, I want to thank you again for increasing and strengthening your commitment to cooperation between USAID and the Government of Tunisia.  I strongly believe that our partnership will continue to advance our common interests, not only for our mutual benefit, but for the benefit and stability of the entire region.

Announce the upgrade of the USAID mission in Tunisia and the development assistance objective agreement which pledges over one billion Tunisian dinars in USAID assistance over the next five years to help the country reach its economic and democratic governance goals.

Ma3an is a program funded by USAID to strengthen the resilience of Tunisian communities and support their cohesion. The five-year program will reach 30 local communities in 15 Tunisian governorates.  During this launch event, organized in partnership with the Presidency of the Government, the Ma3an team kicked off flagship Community Support Activities.

On Tuesday, August 27, 2019, USAID Assistant Administrator Michael Harvey went to Kairouan, where he met with the Advisor to the Presidency of the Government in charge of Youth, Chokri Tarzi, and the governor of Kairouan, Mohamed Bourguiba, along with other representatives from the regional government representatives, the World Health Organization, and delegates from  North of Kairouan and Nasrallah counties.