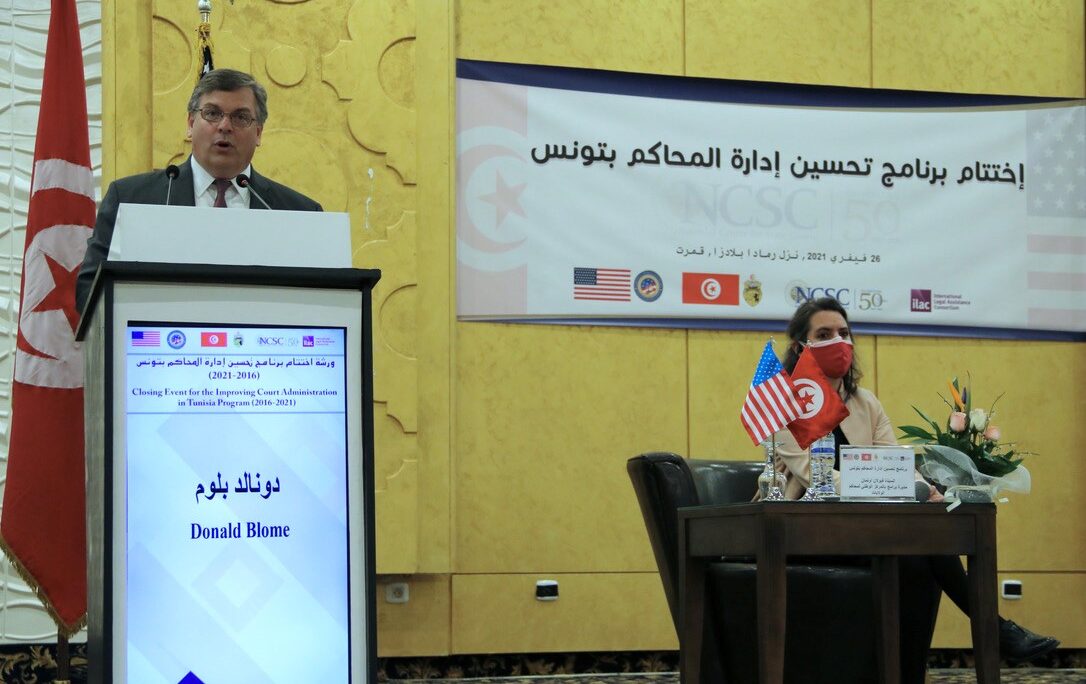 Good morning.  We are here today to mark the end and celebrate the many accomplishments of the “Improving Court Administration” project — a five-year, $2.5M collaborative effort between the United States and Tunisia’s Ministry of Justice.  I would like to thank Acting Justice Minister Hasna Ben Slimane for inviting me today, as well as Chief of Staff Mr. Mohamed Salah Sebri and the head of the Ministry’s International Cooperation Office Judge Raja Boussema and her team.

A special thanks to the Ministry’s General Inspection and Statistics Department; and the judges, prosecutors, clerks, and court administrative staff from the eight model courts.  Their participation was vital to bring to fruition the truly noteworthy accomplishments of this project.

Finally, I would like to thank the NCSC team, who was in many ways the lynchpin for ensuring this project’s success.

When the Tunisian people carried out their revolution in 2011, they made a commitment to democracy, transparency, and the rule of law.  Today’s ceremony showcases our two countries’ cooperation towards these principles.

Since 2012, the United States has committed over $22M to support the Justice Ministry’s efforts to improve the judicial system for its citizens.

This project is a wonderful example of how the judiciary has improved through our joint effort.  Five years ago, eight courts from different regions — Ariana, Bizerte, Kef, Sousse, Tozeur, Gafsa, Kef, and Tunis — served as incubators to test and validate innovations and reforms, before rolling out the changes to other courts.  Besides donating 500 computers and other office equipment, the work included developing guides and standard operating procedures for uniform operations; and using technology for greater efficiency and transparency in the courts’ service to the public.

These changes improved productivity.  They provided ways to monitor court caseload and staffing needs; build organizational capacities; improve communications with litigants; and expand collaboration within the courts and with other justice sector stakeholders.

I’d like to share an anecdote to highlight how meaningful these changes have been.  The courts used to submit monthly paper reports to capture case and caseload statistics.  The preparation, as you might imagine, was very labor intensive and took many hours.  In fact, the amount of paper required, when lined up, was 75 kilometers long every month!  With technology, these reports are now digital, use e-signatures for certifications and tracking, and once the courts click “submit,” the Ministry receives the reports immediately, doing away with delivery delays.  The time saved not only freed staff time to improve on more efficiencies, it also dramatically reduced paper usage helping the planet.

Technology has been crucial in these reform efforts.  In a different joint project, the United States donated sophisticated video conferencing equipment to connect Tunisian courts and prisons to create “Remote Courts.”  The ability to hold virtual hearings meant even a pandemic could not stop court proceedings.  Instead, it created efficiencies by removing the logistical and security factors of prisoner transport; supported COVID sanitation measures; and ensured cases moved through the system.

Harnessing technology has improved access to justice for Tunisians.  Court archives are now managed electronically.  Court transcripts have begun to be captured in “real time.”  Even the wait experience for court visitors has improved with an electronic queuing system.

More than 1,700 judges, prosecutors, clerks, IT technicians and statisticians — representing 145 courts — have been trained on new court administration procedures, court-litigant relations and communications, IT skills, and crisis management.  The many changes and investment in training reflect the seriousness with which Tunisian leadership and judicial stakeholders take these reform efforts.

The foundation for a modernized court administration has been laid.  I am very proud of the United States’ support in this effort.  As improvements and reforms continue, the United States remains a steadfast friend and partner with Tunisia to support the people’s continued demand for democracy, transparency, and the rule of law.