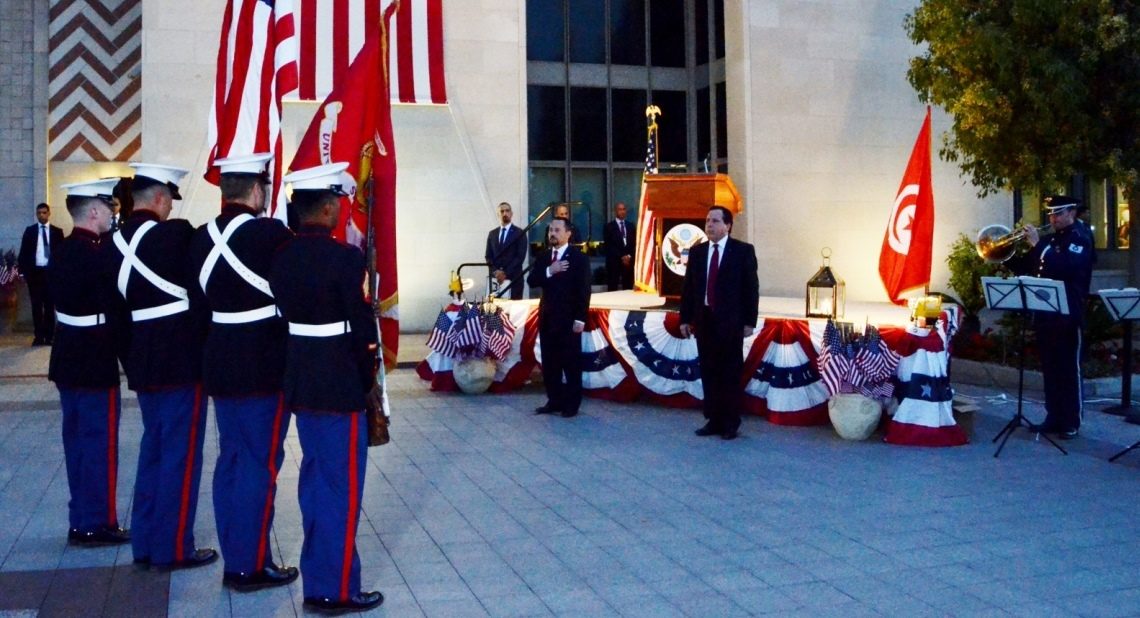 As prepared for Delivery

As the American Ambassador to Tunisia, it is a genuine honor for me to be back in Tunisia after so many years and to be your host this evening, as we celebrate the 240th anniversary of the independence of the United States of America.

Many generous sponsors contributed to this event.  There are too many to name, but I particularly want to acknowledge Anadarko, EPAC Technologies, Cerealis, Express Logistics UPS, and Johnny Rockets.

I would also like to thank the U.S. Air Forces in Europe Band for the exquisite musical entertainment they have provided us this evening and their beautiful renditions of our two nations’ anthems, as well as Ines Belayouni and her band, some of Tunisia’s  up-and-coming stars, who will entertain us the rest of the evening.

Last, but certainly not least, I want to acknowledge the extraordinary efforts of Cairo Jennings and the members of the Independence Day Committee who worked long and hard for many months to organize this evening’s event.

I can think of no better place to celebrate the birth of American democracy than in Tunisia. The United States and Tunisia have shared a special bond for over 200 hundred years. That bond grew even closer in 2014, when Tunisians chose their first democratically-elected President, and put in place a new, elected Parliament to represent the Tunisian people.

No two democracies are alike, but there are certain values, ideals, and principles that we share.  The 19th-century French historian Alexis de Tocqueville, in his famous book Democracy in America based on his travels across our country, observed, “The health of a democratic society may be measured by the quality of functions performed by private citizens.”

If it is possible to judge the health of a democracy by the quality of the actions performed by private citizens – then Tunisia’s democracy is very healthy indeed.  That comes as no surprise, for Tunisians deeply love their country, and there is no better expression of that than the words of the late Tunisian poet Sghaier Ouled Ahmed.

The last five years have been tough for Tunisia. Many people, particularly Tunisia’s youth, are frustrated at the slow pace of change.  They are discovering that democracy is not a sprint, but a marathon.  In the United States, we have been working at our democracy for 240 years, and we’re still working at it.

For a democracy to survive, a country’s economy must flourish. And the United States is working hand-in-hand with Tunisia to build a strong economy and to ensure that Tunisia’s workforce is ready to participate fully in the 21st-century global marketplace.  Last month, at the Joint Economic Commission meeting in Washington, Tunisia and the United States announced a series of measures aimed at improving the business climate, fostering investment, creating jobs, and spurring inclusive economic growth that will benefit all Tunisians.

Democracy cannot survive, however, if people do not live in security. Bardo. Sousse. Ben Guerdane. Tunisia has faced serious threats to its security, and its security forces have responded bravely, showing the world that Tunisians are capable of defending their democracy.  We stand shoulder to shoulder to support Tunisia in this fight.  Just last month, right after the Joint Economic Commission came to a close in Washington, the Joint Military Commission took place here in Tunis.  During these bilateral discussions, the United States pledged to continue to provide equipment and training to support Tunisia’s security.

This week at the U.S. Embassy we mark three important events in the history of our bilateral relations.  Two days ago, we commemorated Memorial Day at the American Cemetery in Carthage, where American men and women who gave their lives to free North Africa from Nazi occupation are buried.  Tonight, we celebrate America’s independence, and recall Tunisia’s early recognition of our independence.  And this Friday, we will launch a year-long celebration of the 60th anniversary of the establishment of the U.S. Embassy in an independent Tunisia.  All three occasions remind us of the many ways the histories of our two nations and our two peoples have intertwined over the years. This history provides us with a firm foundation upon which to build a joint future.

Thank you once again for joining us for this special celebration. Enjoy the evening.