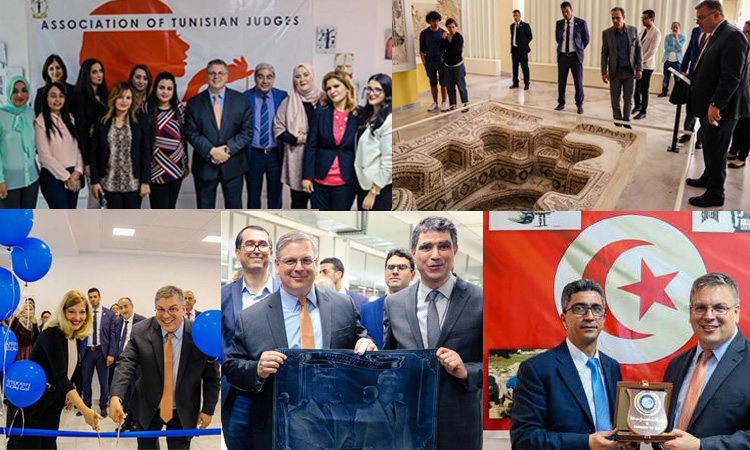 The Ambassador’s visit to Sousse supported U.S. engagement and economic initiatives in the region. During his visit, he inaugurated the new location of Amideast Center, and a new factory of SARTEX, which produces American jeans in Tunisia for export to Europe. He also visited Tunisia’s first probation office, a pilot project designed to rehabilitate prisoners and reduce prison overcrowding.   Ambassador Blome is proud to see the ties between U.S. and Tunisian businesses, cultural and education institutions grow because they bring our people closer together in pursuit of mutually beneficial goals, ranging from enhanced educational opportunities to creative artistic collaboration to better job opportunities.  This contributes to greater mutual understanding between our two people.

Ambassador Blome was pleased to visit the Sousse Probation Office, which receives support from the U.S. government.  It is the first of its kind in Tunisia, and offers alternatives to incarceration designed to rehabilitate prisoners and reduce prison overcrowding.  Ambassador Blome also visited the Tunisian Association of Women Judges, which also receives U.S. assistance.  It is advancing women’s participation in the Tunisian judiciary throughout the country.

Ambassador Blome Inaugurated the new location of Amideast in Sousse

Ambassador Blome inaugurated the new location of Sousse’s Amideast Center.  Amideast is an American educational NGO that houses the Embassy-supported American Corner and English language classes. “Congrats to Amideast Tunisia on its new space in Sousse!  The U.S. Embassy is proud to partner with Amideast Sousse on a number of initiatives.” – Ambassador Blome

Ambassador Blome was proud to inaugurate the new SARTEX Group’s Denim House factory.  It produces jeans for a number of flagship American brands such as Levis, Calvin Klein, GUESS, Hugo Boss, Ralph Lauren, Polo, Tommy Hilfiger and more.  “U.S. trade and investment can help create jobs and boost the Tunisian economy,” he said at the event.  SARTEX is a member of the AmCham Center, a partner of the U.S. Embassy to promote U.S. business in Tunisia.