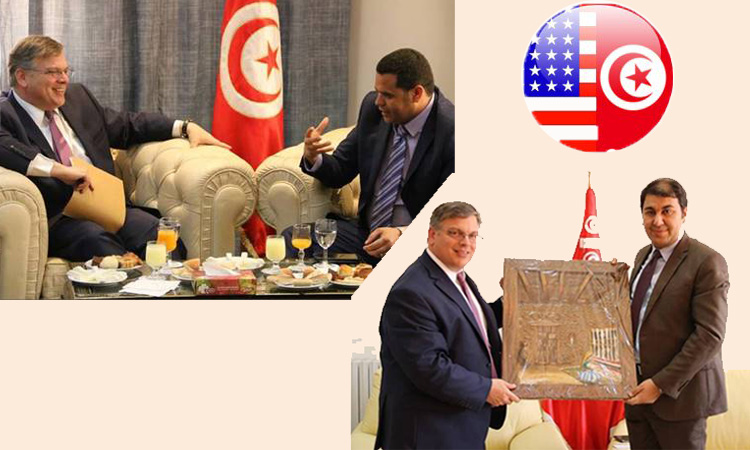 On April 16-18, 2019, Ambassador Blome visited Tozeur and Kibili, which he identified as important regions to demonstrate U.S. economic development and diplomacy support.  On the trip, he visited a number of beneficiaries of U.S. assistance, including the Kibili Municipality, a date farm, and a public school.  He also spoke to citizens of the region through local radio station “Nefzawa FM.”

In his visit to the tomb of the famous Tunisian poet Abou Al kacem Echabbi, who was a native of the Tozeur region, Ambassador Blome commented on his famous poem If people ever chose to live, fate can do nothing but respond: “These words are immortalized in history to inspire Tunisians and all the peoples of the world. During my visit to Kebili and Tozeur this week, I had the opportunity to visit the Mausoleum of Tunisian poet Abu Elkassem Chebbi, as well as other places that reflect the beauty of this region and the beauty of Tunisia.    Thank you for your hospitality and see you in other visits Inchalla.” –  Ambassador Donald Blome

The oasis of Tozeur opened its spaces to warmly welcome Ambassador Blome, who visited the Global Trade Dates farm, which is one of the beneficiaries of the AmCham Tunisia Export Lab projects. Export Lab supports small and medium sized Tunisian enterprises with training, and technical and logistical support to access global markets with a focus on the U.S. market, where the products of Global Trade Dates are already available.  We thank them for their hospitality.

Ambassador Blome visited the Tozeur Artisanal Village with alumni leaders of the Women’s Entrepreneurship Institute and 12 women artisans during their business planning and market research workshop.  The Women’s Entrepreneurship Institute– called L’ellet’hom, meaning “their [female] leader,” in Tunisian Arabic – is a project devised by alumni of the 2016 Thomas Jefferson Scholarship program.  The group won in the Alumni Engagement Innovation Fund (AEIF) – a global competition for U.S- funded exchange alumni to lead community development initiatives.  The project coaches women in rural areas on how to use new technologies to generate business ideas and position their products in the market.  With a modest amount of funding, in just a year and a half, L’ellet’hom has developed into a non-governmental organization which has visited 10 Tunisian governorates and delivered 23 training sessions, benefitting more than 380 women.  Project leaders and beneficiaries in Tozeur enjoyed discussing their artisanship, business prospects, and challenges with the Ambassador.

In his visit to Kebili, Ambassador Blome and Embassy staff were warmly welcomed by the governor of Kebili, Mr. Sami Ghabi.  The Ambassador emphasized the U.S. commitment to support Tunisians across the country, and his interest in learning about projects and local initiatives supported by the US government.  He and Embassy staff visited Mansoura Park with the Mayor of Kebili, Mr. Ahmed Yaacoub, members of the Municipality staff, volunteers of the project, and some representatives from local civil society.   Mansoura Park is a USAID-funded project in the governorate, that transformed an estuary into a suitable green space for citizens recreation.

Ambassador Blome was happy to be hosted by regional radio station Nafzara FM to talk about US government-supported programs in Tunisia.  At the station, he also met with young people and listened their views  on how these programs affect them and what cooperation can be done in the future between our two countries.

Ambassador Blome Savors Meat in a Jar In Tozeur