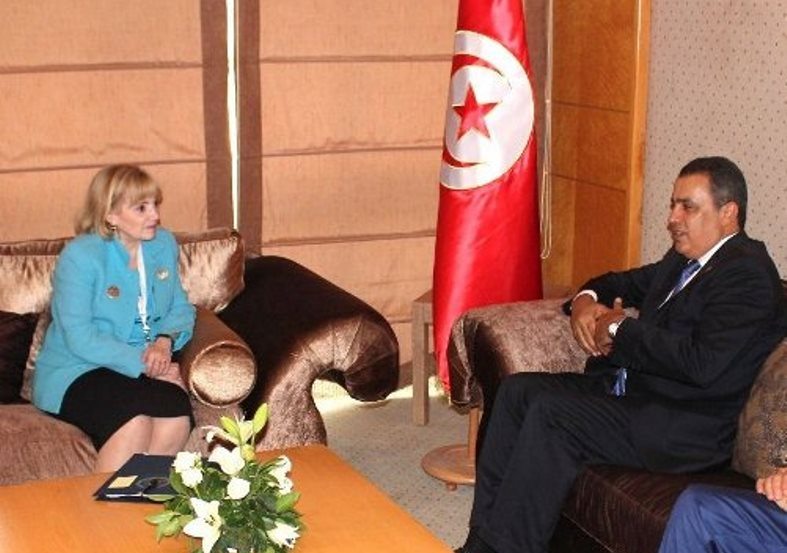 Good afternoon. Prime Minister Joma’a, Prime Minister Valls, colleagues.  It’s an honor to address all of you today. Tunisia is succeeding in this transition thanks to its commitment to political consensus at home and economic engagement with the world.  We would like to commend Tunisia for the strategic, sector-by-sector approach it is taking to attract new investment to the country.  In particular, the conference concept paper serves as a strong basis for international funding agencies to help finance Tunisia’s medium- and long-term investment priorities.

So many of us are here today because we believe that democracies are strongest when they’re inclusive, just and provide widespread economic opportunity to all members of society.  The elections scheduled for later this year will be a critical step in the evolution of Tunisia’s democratic transition.

A crucial part of ensuring Tunisia’s  progress is recognizing the vital role that civil society and the private sector play in promoting economic opportunity and improving the quality of life for all Tunisians.  However, nurturing a thriving private sector that acts as an engine for job creation won’t happen overnight.  But the process can be expedited and advanced by the countries and businesses represented here today.

Tunisia’s public and private sectors, together with civil society and international organizations must work together towards the common goals of economic growth and job creation.

Tunisians of all ages want the opportunity to succeed in whatever profession they choose. They want their government and business leaders to foster an open business climate that encourages competition, incentivizes entrepreneurship and welcomes investment.

We applaud the important steps the Tunisian government has taken in the past year towards reassuring markets and addressing some of the causes of its economic challenges.  We also applaud your priority on ensuring security during this critical period, as there can be no economic progress or private investment without a secure environment.

If these objectives are achieved it will send a signal that more businesses should take a closer look at Tunisia.

The Tunisian Government is doing its part to reassure investors that Tunisia’s future is bright and that it’s listening to their concerns. It has articulated an extensive list of reforms that, if fully implemented, will unlock the incredible potential of the Tunisian people.

The United States Government and the American business community are committed to supporting Tunisia as it moves to solidify its democratic foundations and build a broad-based and dynamic economy.

Along with our partners, the United States Government is very much involved in important initiatives that demonstrate our commitment to Tunisia’s future.  In terms of our continuing support to develop the private sector:

U.S.-Tunisia bilateral trade has grown steadily over the past few years and totaled more than $1.5 billion last year.  Tunisia’s highly skilled and educated workforce has already attracted American economic giants like GE, Hewlett Packard, Microsoft, and Pfizer to set up business in Tunisia.

It’s in all of our economic and strategic interests to see Tunisians achieve the democratic society they have fought and risked so much for.

Let me congratulate Prime Minister Joma’a for taking the initiative to organize this Conference.  The United States strongly supports your vision of Tunisia as a start-up democracy where people are judged on their merits and where economic opportunities are open to anyone with initiative and the drive to succeed.